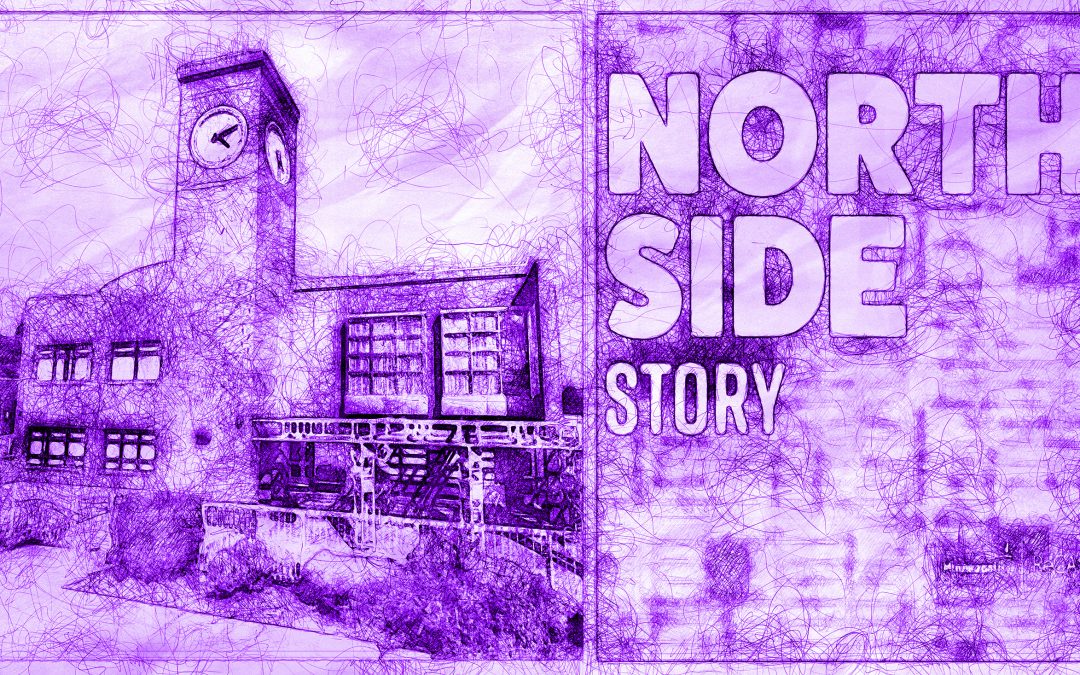 Interviewer: 00:14 Okay. Okay, so we’re referring to this map right here. Do you currently, have you lived in this area?
Teresa Williamson: 00:22 I lived half a block from here, 1800 Freemont Avenue North.

Interviewer: 00:26 How long have you lived there?
Teresa Williamson: 00:28 Seven years.

Interviewer: 00:31 Seven years. Okay. So thinking back from when you first moved into this area over here, what changes have you seen?
Teresa Williamson: 00:36 Oh my God. I’ve seen a whole lot of changes. I was here when Annie’s Café, and there was all types of black businesses up and down Broadway. There was bingo halls, there was all kind of convenient stores. It was easy to get an apartment back then, too. Back in the 80s. You didn’t even need to have no kind of, nothing but your word, and people would let you rent property. Right now you won’t because of all the stuff that’s been happening with housing.

Interviewer: 01:04 Okay. Can you name a positive change and just one negative change?
Teresa Williamson: 01:08 A positive change … I think the positive change would be they got a Emerge Works over here, and Emerge is focusing a lot of jobs on young, black men youth. So I like that part about the north side. And the fact that they also have the workforce center now, on this side of town. That to me, to help the young people, is a plus.

Interviewer: 01:30 Okay. What about a negative thing you’ve seen?
Teresa Williamson: 01:34 The negative thing that I’ve seen is the killings and the unfairness and me being afraid for the young black man.

Interviewer: 02:04 What do you feel caused the changes you’re seeing in the area?
Teresa Williamson: 02:09 A lot of negative publicity, a lot of people … I’m not gonna point no fingers at people coming from out of town because everybody needs a place to live … but when you come here and you don’t have no respect for property, no respect for where you live, no respect for people, that brings down the community. There’s no unity.

Interviewer: 02:24 Alright. Why do you feel like there’s no unity?
Teresa Williamson: 02:29 Because we don’t support each other like we should. As people of color, we’ve already been conditioned to be less than what we supposed to be. I feel like if we don’t build each other up, instead of tearing each other down, we don’t have no love for the community, no love for each other hardly anymore.

Interviewer: 02:48 I feel that. So we are gathering these stories to increase understanding between the city of Minneapolis and the community on the impact of historic discriminatory government policies and practices in the area, like housing, transportation, economic development, and more. Examples include housing and employment discrimination in the early 20th century, the war of drugs in the 1990s, and others. What impacts on these policies, or others, had on the community in general?
Teresa Williamson: 03:20 Now break it down to me one more time.

Interviewer: 03:22 So basically, what impacts have these policies, housing transportation, economic development, the war on drugs in 1990s, what impact have they had on the community in general or what have they had on you or your family?
Teresa Williamson: 03:38 More killings, and communities that are trashed out. Properties, sidewalks, no community unity, and that’s why. Also between the police and the community, we afraid of the police, first of all. Let’s get that right. Most of us are afraid of the police because we know they’re afraid of us, so we don’t know what they’re gonna do to us. We have that inside of us already, that when we see a police, we feel like we did something, even when we didn’t. But it’s all this that came down through us that they done hurt so many people for nothing, that it’s impacting me as a person.

Teresa Williamson: 04:16 Hey, I could know people that just be at the wrong place at the wrong time and they can accuse me of something. Because we don’t have no understanding between the police and the community.

Interviewer: 04:26 Right. What impact do you think that had on you or your family personally?
Teresa Williamson: 04:31 On my family, the impact … right now, I have a son that was shot five times with a 357 when he was 15 years old. You know what my son told me when he laid on the sidewalk? The man asked him, I guess his feet had a smell or something. He said, “Your feet are smelling or something.” But my son’s laying on the ground with five shots in him. That shouldn’t have been something that should have even came out of his mouth. I mean, he should have had more compassion for a human being, whether he black, white, Chinese, or whatever. That wasn’t appropriate to me.

Teresa Williamson: 05:06 That was when he was 15, he’s 37 now. So those words have stuck with me through all these years.

Interviewer: 05:16 What changes have you seen in the community that raise your level of stress or are concerned about his future?
Teresa Williamson: 05:23 Not being able to catch the bus at night, because you don’t know who out here’s gonna rob you. You don’t know if a man’s gonna think you prostituting, call you standing on the bus stop. You just don’t know. Back in the day, you didn’t have to worry about that. You could get on the bus at 9:00 at night, you didn’t have to worry about nobody trying to rob you, rape you, anything like that.

Interviewer: 06:18 So what gives you hope for the future in this community?
Teresa Williamson: 06:21 Jesus Christ. And loving people and trying to show love.

Interviewer: 06:28 Amen. What part does the city of Minneapolis need to play in making a more hopeful future?
Teresa Williamson: 06:31 You said what now?

Interviewer: 06:31 What part does the city of Minneapolis need to play-
Teresa Williamson: 06:34 Once again, it goes back to poverty. We’re living in poverty time. We don’t have food, we don’t have housing. First of all, and our more experienced are broke down. We feel more hopeless than we do helpful. We feel like we hopeless because we can’t get a job, we gotta ride the bus, we ain’t got a car, we don’t have an education. So like I said, once again, to me this is my own opinion. A lot of that stuff has went on … but still, it comes to your generation and your children’s generation that this can all change. That’s my focus that I would like to get out to the community.

Interviewer: 07:20 Amen. When you think about this area today, what impact do you still see from these historic government policies?
Teresa Williamson: 07:29 I still see division. We’re divided. If you can’t even walk down the sidewalk, and I’m from Mississippi and we speak to everybody. People don’t even speak to you when they pass by you no more. They’d rather put they headphones and ignore than say, “Hey, how you doing?”

Interviewer: 07:46 Yeah. How would you describe your relationship between the city of Minneapolis and this community over here over the years?
Teresa Williamson: 07:56 I guess they’re trying. That’s all I can say.

Interviewer: 08:00 Right. Okay. What are your expectations for the city of Minneapolis relating to this community? To what extent do you trust the city of Minneapolis to deliver those expectations?
Teresa Williamson: 08:06 My expectations is for them to help build this community back up. To make Broadway back to what it used to be. Broadway don’t have nothing. Soon as we get stores over here, they’re taken away because of theft, crime, and all that. But that punishes the people that do need these stores. So they need to come up with more solutions on security ways that we can keep our stores and stop taking our stores away so we gotta go way out to other communities to do our shopping. We need to be able to spend our money in our community and put that money back into the community for youth and youth programs.

Interviewer: 08:44 Okay. What part do you feel like you could play in creating this more hopeful future?
Teresa Williamson: 08:49 I play a part in it every day because I show everybody love. And I know I understand that we all in the struggle, we all suffering, and we all pain. So being an individual person myself, I see that in people and I let them know I know exactly what you feeling because everybody hurts, everybody in pain, everybody tryin to have some in this life.