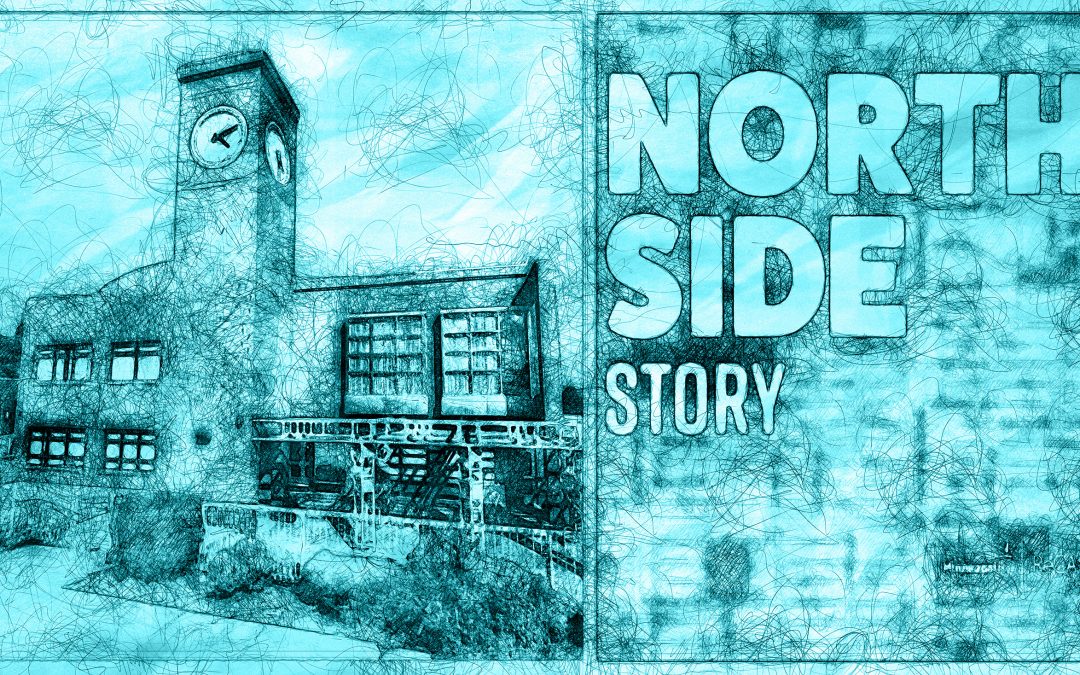 Michael Chaney: North Minneapolis is going green, give us a call, and learn what we mean. We’re one sly urban blight, now sits luscious garden sites, gardens without borders, classrooms without walls, architects of our own destinies. Access to food, justice for all. So, I’m a activist, I’m an organizer, I’m a freedom fighter for the African American community.

Interviewer 2: I’m sorry, I’m not supposed to interrupt the interview, but I had to, it’s just that, you say you’re a freedom fighter, look at my tattoo-
Michael Chaney: Alright brother.

Interviewer 2: I can’t wait to connect after this.

Michael Chaney: And though there’s this façade of progressive social altruism, the reality, if you look at the facts, look at the numbers, you’ll find that it’s quite the contrary that African Americans in Minneapolis, and in Minnesota are not faring well, and it’s by design.

Interviewer: Can you tell me more about government policies, such as housing and transportation in North Minneapolis, and employment?
Michael Chaney: Well again if you were to go back, of course historically there was the home of the riots in North Minneapolis that was before my time here and even in Minnesota, but going back to leadership of guys like Spike Moss and folks that started the way, Vusi Zulu and folks that were again, organizers who saw the disparities then and lack of access, not only here, but across the country with either the Civil Rights Movement, and the assassination of Martin Luther King. Minneapolis was no different and folks were outraged, and lead toward rebellion to fight against those who have historically been oppressed against.

Michael Chaney: And so, it’s the same today, all these many years later, we have had some, there’s been maybe some opportunities here, programming, but by and large I would say that the circumstances, the situation from housing, may right now, there’s a real fear of displacement, of folks coming in and moving out the indigenous people from this community, African-Americans, communities of color.

Michael Chaney: There are those who really now want to gentrify and move forward to take over this valuable land as we sit overlooking Downtown Minneapolis. We can look at instance like the Homeland decree, and all kinds of examples of federal lawsuits that, going back into the 60s where there was red-lining and looking at housing covenants that in certain communities in Minneapolis only white folks only need apply.

Michael Chaney: So much of that same kind of processes, practices and policies, that are destructive and that are not helpful, do not give voice to the African-American experience.

Interviewer: Since I’ve seen you going back in time, can you tell me a bit about the war on drugs in the 1990s, what do you know about that?
Michael Chaney: Well, again, most of the work that I do, I see myself as a cultural nationalist so much of the work as the founder June 10th celebration in the 80s. Much of my work has really been to really celebrate the guests, the talents of the black experience, so I’ve been more focused on doing proactive rather than responding to things like police brutality, things like that I have been less, the fight against drugs.

Michael Chaney: Much of those realities are contrived and here to oppress black people, and so I’ve tried to celebrate our gifts, our talents and tried to build education and educational programming, youth programming. The food program here in Oak Park was something that I started here-

Interviewer: Oh wow-
Michael Chaney: In 2010, and so I have birthed ideas that can try to help support marginalized communities, people who are poor and oppressed. I have tried to do programming, come up with ideas to educate people and help lift them up and out of poverty.

Interviewer: Wow, what gives you hope about this community?
Michael Chaney: I love black people, so… that’s it.

Interviewer: Amazing. Do you have any thoughts in the closing interview?
Michael Chaney: Yeah, I would urge us all as positive, progressive African-Americans, that to realize that we control our own destiny and that just like the Maroons in the islands and freedom fighters all over the world, we must keep on, we must put up the fight to resistance and we must work to help to advance our race of people.

Interviewer 2: Thank you so much sir.
Michael Chaney